We knew Wednesday was going to be filled with action, but it didn’t become a reality until we put on those green(e) shirts at 7:00 a.m.

The morning was filled with preparations for afternoon activities, and after packing our camera bags we were off to Newsday’s official headquarters. We enjoyed a tour of the printing rooms, library, and office area to get an understanding of what it’s like to work for a large journalistic business, and what kind of jobs are included in such a facility.

After our tour, we headed over to the Long Island Ducks game against the New Britain Bees in the Ducks home of Central Islip. My team decided to cover the “Pace of Play” policy, a new set of rules in the Atlantic league designed to limit game lengthiness. We interviewed the most bored-looking fans, and families with disinterested children who looked like they could have something to say about game length.

Snoozing ducks fans seemed to be of abundance, especially the younger ones late in the evening. Wether this was from a sugar crash, the hour of day or length of game, we were determined to find out. Of course we were crashing as well from running all day, but the job of an aspiring journalist is never done. A fellow friendly photographer we had previously met was kind enough to provide me and Professor Wasim Ahmad with VIP access, which was an amazing photo opportunity.

As the 7th inning of the double-header came to a close, the Ducks ran off happily with their first of two wins of the night against the bees. These games take them a few steps farther into the beginning of their playoff season.

Between games many young viewers began to look for good vantage points for the scheduled fireworks extravaganza across the field.

Who doesn’t enjoy a flashy fireworks display to end the night? 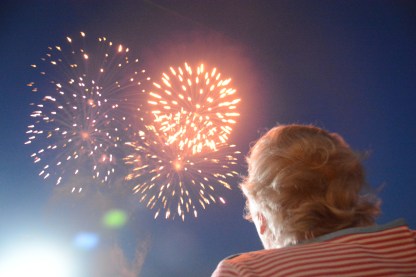