By Hallie Harvey
Newfield High School
More than 2,500 people watched the movie “Inside Out” on the field of LaValle Stadium as part of the seventh annual Seawolves Cinema Movie Night, a free summertime treat the university hosts to build bonds with the surrounding community surrounding.
…Continue Reading 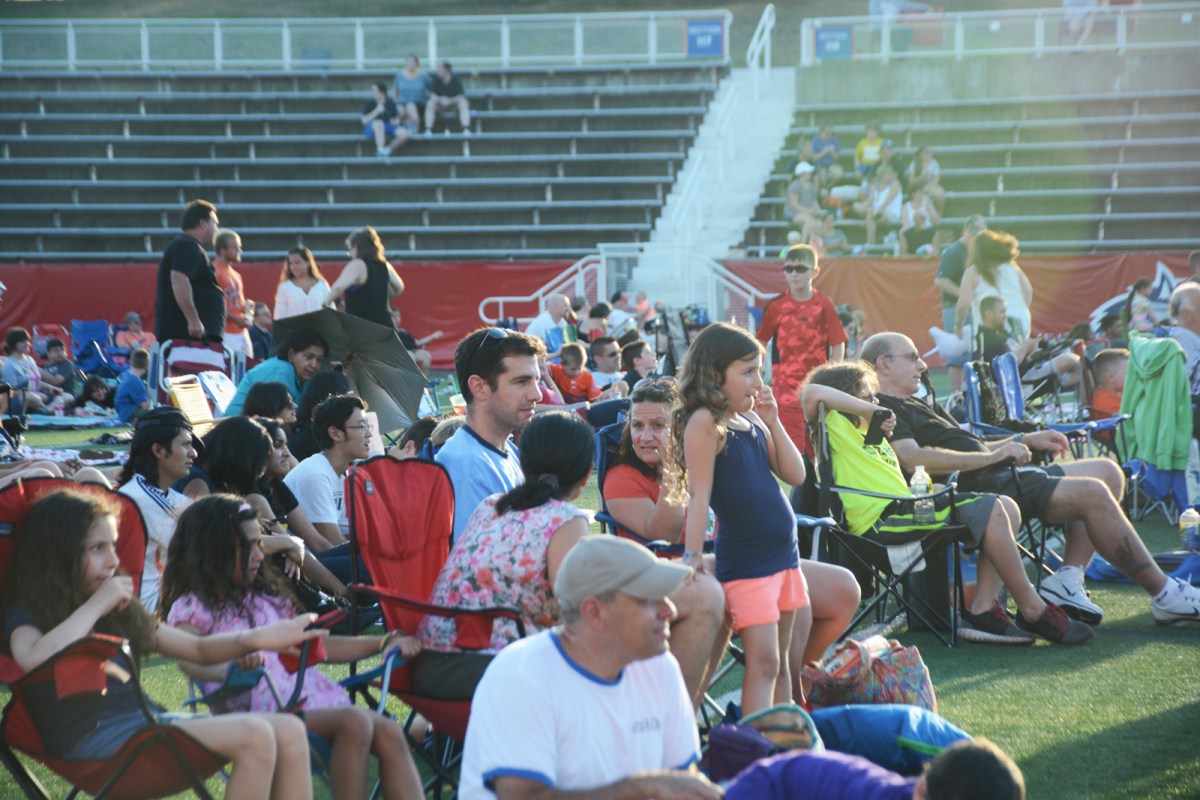 More people than ever before filled LaValle Stadium on Stony Brook’s campus to watch something other than the school’s popular football team.

More than 2,500 people watched “Inside Out” — not in a theater but right on the gridiron — in the seventh annual Seawolves Cinema Movie Night, a free summertime treat that the school hosts to build bonds with the community surrounding it.

“The more that we can connect with the community, the more that they will support our athletic programs throughout the year,” said Shawn Heilbron, Stony Brook University’s athletic director, before he and his family watched the film which screened at 7pm.

“We just want people in the community to feel like Stony Brook is their school whether they went here or not, we’re in their community,” Heilbron said.

Parents and kids all attended this family-oriented event, but kids seemed to love it the most. Families spread out on blankets and lawn chairs along the turf field, as the kids freely ran around playing ball games. At least one young fan was supporting Stony Brook’s athletics, sporting his men’s basketball team jersey.

“Kids love to come here and get on the field and run around and get to watch a movie in the football stadium,” Heilbronn said. “It’s just a lot of fun … it’s a great opportunity to run around on the field here at Stony Brook.”

The Seawolves Cinema Night was a great way to bring families and kids together and it also struck a commonality between sports and the movie. “Inside Out,” which is about a young girl’s feelings having feelings, seemed to be a great movie choice that was family-friendly and a more recent movie that not everyone had a chance to see in theaters.

The goal of the event was to promote Stony Brook University and gain support from the community for Stony Brook athletics. The players of the Stony Brook Division 1 football team even came to the Movie Night to sign posters, take pictures and represent SBU sports.

Sophie McHeffey, a Stony Brook University Hospital staff member who came to see the movie, said, “I’ve been meaning to see this movie for a while — I’ve never seen it.”

Elissa Romano, another Stony Brook employee, was actually a first-timer who came with her family.

“I’ve known about it for years, but last year it got rained out, and the year before I found out too late, so I knew it was coming so I’ve been checking the athletics website to find out when it was coming,” she said.

Members of the Stony Brook community, like Mike Jargo, have been looking forward to these summer events to support the sports teams.

“We are season ticket holders to the men’s basketball program, so they had a little ‘meet the coach’ presentation before we came here,” he said.

The whole night seemed to be a big hit for the families and the Stony Brook athletics program.

Stony Brook resident and fan Joslin Molow said: “I can’t really imagine anything else. This place already has the best kinds of events!”