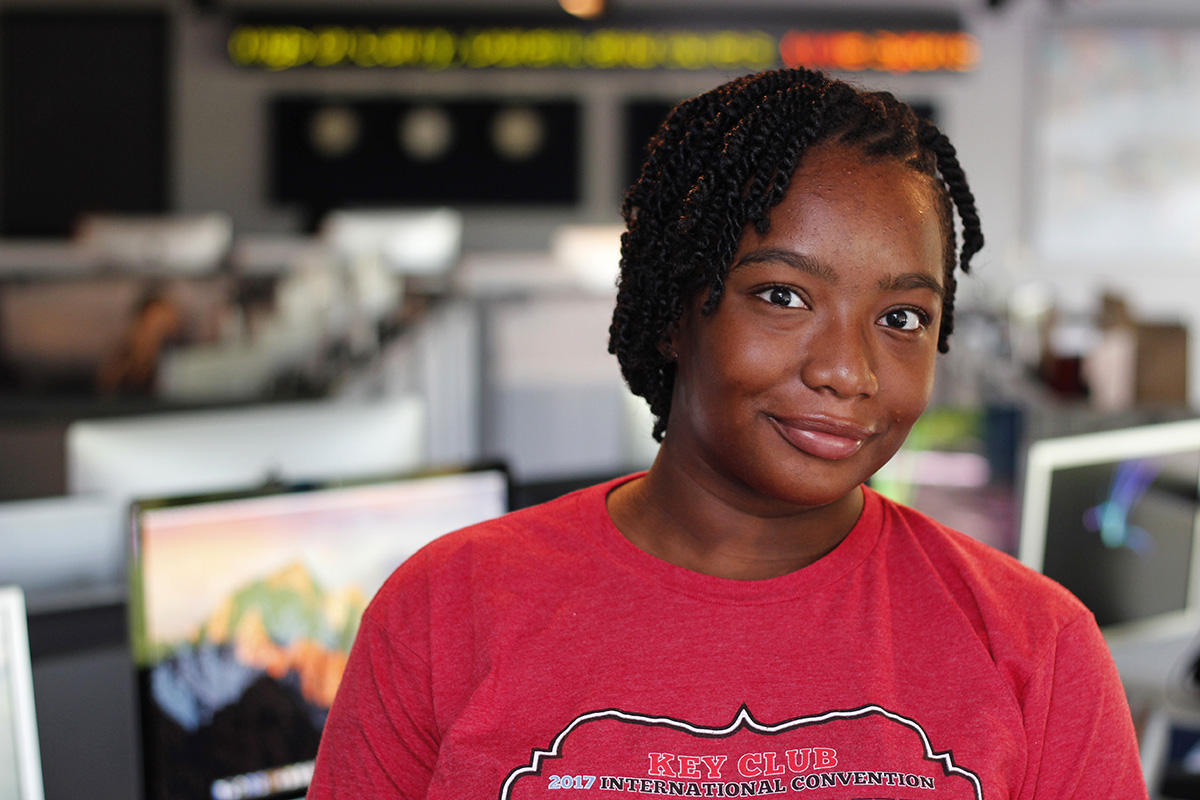 Ebony Thompson’s love of journalism started during her elementary school years, when she wrote stories in a composition notebook.

That interest strengthened during her sophomore year of high school, when she started paying more attention to world news and noticed injustices such as human trafficking and human rights violations during time of war.

“People have so many different backgrounds and stories and I just want to be the one to tell people about what other people are going through and what’s going on in the world,” said Ebony, a 16-year-old rising senior at Baldwin High School.

Ebony is originally from Jamaica, but has lived in Brooklyn, Elmira in upstate New York and on Long Island.

“Moving around a lot has made me realize that you always have to be kind to people and sympathize with people because I was always the new kid,” Ebony said.

Throughout school, Ebony has favored her art and English classes the most because, “those are the classes where I can really express myself,” she said.

Sparked by her interest in journalism, she decided to join Phoenix Magazine at her school the beginning of her freshmen year. Since then, she has moved up the leadership ranks to the positions of vice president and co-president.

“The best aspect of journalism is getting the story itself,” Ebony explains, “and getting it from the source.”

She welcomes any opportunity to be able to “see the world more” by interviewing people and gaining more perspective on certain topics that impact people’s lives such as immigration and the health insurance debate.

Ebony has written several articles for the Brooklyn-based Coalition of Concerned Medical Professionals’ newsletter called Vital Signs, which is distributed to the 40-year-old organization’s members and supporters. Among those was an article about the role the organization plays in improving the health of low-income community members, as well as an article about the impact the coalition has had and the necessity for people to organize and fight to change healthcare.

“She is remarkably skilled for a person her age,” said board President Elisabeth Stevens, who has been impressed with Ebony’s writing, noting that she wrote her first article when she was 15-years-old. Stevens added that Ebony provides “meaningful content to encourage people to participate in our efforts.” Ebony said she looks forward to experiencing the behind-the-scenes aspect of the newsroom. “I want to learn more about journalism,” Ebony said, adding that she hopes the Robert W. Greene Summer Institute for High School Journalists will help her decide if she really wants to pursue journalism.

Ebony’s interests outside of journalism include listening to music, reading books, writing poetry and spending time with friends.

Ebony’s biggest supporter in her journalism endeavors is her father, Alvin Thompson. “My dad has always encouraged me to pursue what I’m passionate about,” she said.

Additionally, Nicola Yoon, a young adult author on the best seller lists, inspires her to pursue journalism. Ebony explains, “She’s actually from Jamaica, which is where I’m from and she’s a huge inspiration for me personally because it proves that anything is possible.”