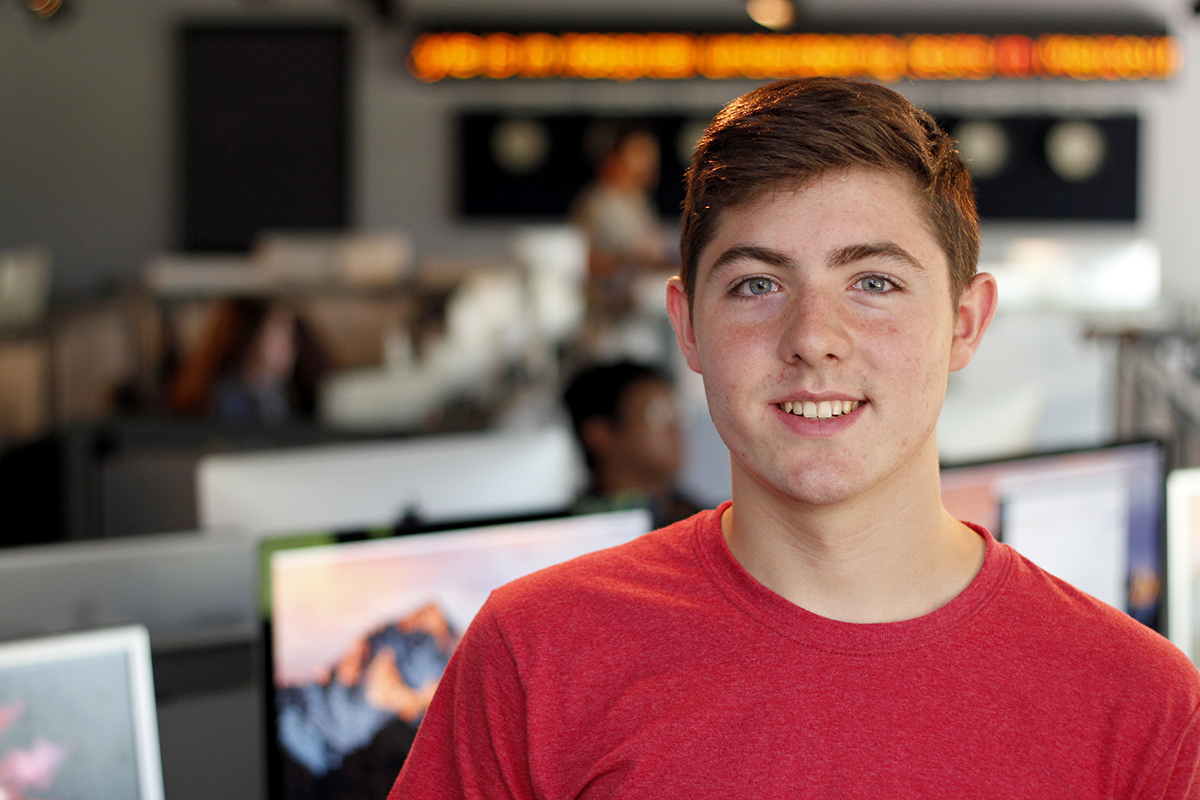 When he was 11 years old, Joseph Sweeney went into a movie and came out dreaming of being a journalist.

“I saw the movie All the President’s Men,” Joseph explained. “It tells the story of Carl Bernstein and Bob Woodward, the Washington Post guys who broke the Watergate scandal. That’s when I said, ‘I’m going to do this. I’m going to be a journalist.’”

Now a 17-year-old senior at Miller Place High School, Joseph dreams specifically of becoming an anchorman. He describes himself as serious but fun-loving as well as an avid news-watcher.

Although Joseph knows that news reporting is a highly-competitive field, he’s convinced that growing up with three sisters has prepped him for the challenge.

Growing up in a large family has taught him “ways to communicate in big groups and express my opinion in certain situations [where] I wouldn’t be heard.”

When he’s not watching the news compulsively, Joseph pursues his dream by copying articles from websites of newspapers such as The New York Times and pasting them onto a teleprompting program where he practices his anchoring skills.

“He’ll be an excellent news anchor when he gets older because he has the motivation and determination to learn,” his mother, Donna Sweeney, said.

For Joseph’s 16th birthday, his grandmother bought him a book on broadcasting — it was about 500 pages. Joseph read it twice.

“Joe has always loved to write and read,” his mother related. “From a young age, I knew he should pursue a career in journalism.”

Joseph’s bedroom — decorated with an Islanders jersey, an American flag, and pictures of his family — also features a bookshelf whose contents lean towards politics and history. Prominently displayed is the three-volume set of the complete text of the Constitution. “I’ve read a few of the chapters,” he said, “and I hope to read more in the future.”

As he delved deeper into the world of broadcast journalism, Joseph discovered Walter Cronkite and became hooked.

The legendary CBS anchorman was “the real hardline journalist,” Joseph said. “When I become a news anchor, I want to be like him. He was to the point.”

Joseph was also inspired by his parents and his journalism teacher. Mr. Vallone encourages his students to study films, documentaries and news reports.

Even though Joseph enjoys high school and writing for the student newspaper, The Krob, the budding anchorman is losing his interest in his home town. “I lived in Miller Place my entire life. It feels like a bubble, and I want to get out … and explore the world and meet new people.”

He is excited to meet new people this summer at the Robert W. Greene Summer Institute for High School Journalists at Stony Brook University.

Joseph, who eventually wants to study broadcast journalism on the campus, said, “I think being a member of the Greene Team is one step closer to achieving my dream of sitting at an anchor desk.”