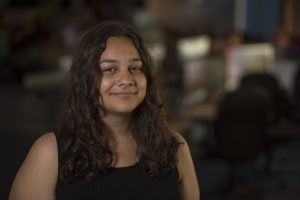 Brianna Depra’s dream of becoming a journalist started with her passion for literature at a young age.

“Every time there was a book fair at school, I would always get so excited and stock up on books,” she said.

Classics including the Goosebumps books inspired her to start writing. Brianna created stories with themes including love, mystery and horror. Brianna didn’t want to just write as a hobby; she wanted to explore careers in writing. In her freshman year, Brianna became aware of journalism as a profession and was eager to learn more about it. Unfortunately, there weren’t any journalism classes or a school newspaper at Hempstead High School.

So she began to write in another medium — plays. In her sophomore year, she became fascinated with theater. Brianna was inspired by many of Shakespeare’s works and wrote monologues and scripts for the drama club when she wasn’t competing on the school’s swimming team.

Brianna received much encouragement from her AP English Language teacher, Felisha Prince, who encouraged her “to step out of my comfort zone,” Brianna said.

“Not only did I write stories and monologues, I started writing poems, biographies, and experiences,” Brianna said. “She showed me how to write with purpose, showing me how powerful diction and syntax is. Because of this AP class, my writing has improved so much.”

Just when Brianna believed she wouldn’t have any journalism experience in high school, Prince helped Brianna one last time before her junior year came to a close. Her teacher informed her of the Robert W. Greene Summer Institute for High School Journalists at Stony Brook University.

“I jumped at this opportunity,” Brianna said.

When she learned that she had been accepted into the program, her father, Ramon Depra, shared her excitement.

“When she told me about the journalism program, I knew this would be amazing for her because it will challenge her,” he said. “She is always writing, so a career in journalism is perfect for her.”

“I knew I wanted to be a part of this program because journalism is something I want to explore,” Brianna said. “Maybe I can report on plays and musicals. That’s a dream of mine.”