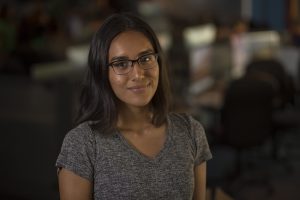 Seventeen-year-old Chelsea Sibri has demonstrated her drive since childhood.

“I’m a very energetic and fun person, but when it comes to work, I’m very hardworking,” said the 17-year-old year old senior at The Scholars’ Academy, in Rockaway Park, New York.

As a young girl with the dream of becoming a doctor, Chelsea worked to reach her goal. Later, after discovering her interest in reporting, Chelsea began to excel in English class. Her newfound passion made her reconsider her dream, but for now she’s pursuing both science and journalism. “I am thinking about double-majoring,” she said.

Chelsea says she has always understood the value of perseverance. As the child of two immigrant parents, she saw the effects of diligence.  “They taught me that with hard work, you really do make it,’ Chelsea said. “That was motivation to work hard.” According to her friend Jonathan Mora, “Chelsea continuously pushes herself.”

Her go-get-it attitude is evident in all that she does. “I will be taking AP Biology, AP Psychology, AP English and AP Art History. I am on the swim team, I’m vice president of my Chemistry Club and I am part of the school newspaper,” she said. As if challenging herself in school is not enough, Chelsea also volunteers in a doctor’s office to get more experience in the medical field.

Despite her busy schedule, she still manages to have fun by going to concerts and exploring the city. “Life can be short so I really want to make the most of it,” she said.

At home, Chelsea is industrious, helping her mother prepare meals. She will continue on her intended path  with the great support from her family, especially her older brother Anthony, who she describes as “a parental figure”.

As much as she prides herself in being self-sufficient, her niece, Angeles, stated, “Chelsea’s not afraid to ask for help because she knows that it’ll help her in the long run.”

Although Chelsea was preparing for a career in the medical field by taking challenging science courses, she was also drawn to the intensity of journalism. What ultimately sparked her interest in media was where she was raised, just 45 minutes from Manhattan.  Ozone Park was a good place to get exposed to the excitement of reporting. “There is so much media in the city, and that impacted me. It presented a big opportunity.”

Chelsea feels that the Robert W. Greene Summer Institute For High School Journalists will be a crucial step in deciding whether or not journalism is for her. “I’m looking forward to the amount of writing we will do,” she said. “I feel like this week at Stony Brook will give me a closer look into what journalism really is.”

Whatever her career choice, Chelsea plans to continue writing. “Writing is my hobby,” she said. “It’s a great way to release stress.”