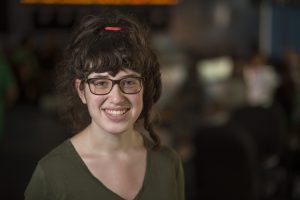 Julianna Orkin’s passion for journalism began when she was 14.

That’s when the now West Islip High School junior wrote an article for her middle school newspaper on budget cuts in the Beach Street Middle School music program. She said her teachers were highly impressed with her work and suggested she become a journalist. After that, she knew she wanted to pursue that field.

She said her father, Steven Orkin, has a lot to do with that pursuit. Orkin — who didn’t pursue a career in journalism but enjoys creative writing and facilitates a local writing group — said he always does his best to discuss real-world issues so that Julianna can apply it to her own life.

“I’m very passionate about the craft of writing, both fiction and nonfiction,” he said. “I’m also very interested in learning about what’s happening in the world, trying to make sense of it and coming up with some answers as to what to do about it. I’d like to think I’ve inspired Julianna to do the same.”

“There were many like-minded people, all interested in journalism or creative writing,” she said. “I got to hear the stories of many people in the various news workshops I attended. They talked about overcoming censorship … and tragedy. It was inspiring and gave me more of a look into journalism.”

Julianna hasn’t decided if she wants to pursue a career in broadcast journalism, political journalism or investigative reporting. She hopes her week at the Robert W. Greene Summer Institute for High School Journalists will help her make a choice.

Julianna said she hopes to get better at meeting deadlines, become a better interviewer, and have a better understanding of journalism after her week-long stay at the Greene Institute. She hopes to meet new people with similar interests and overall become a better journalist.