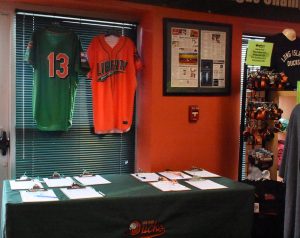 Jerseys hang in the the ‘Waddle In’ souvenir shop at Bethpage Ballpark for the jersey auction to benefit the QuackerJack Foundation. The foundation raises money for ALS Ride For Life and the Alzheimer’s Association, among other charities. (Photo by Lauren Nicks.)

The Long Island Ducks also try to hit home runs when it comes to charity.

The Ducks just finished hosting the Atlantic League All-Star Game for the third time at Bethpage Ballpark in Central Islip. The game ended with a Liberty Division victory during the close 4-3 game on July 11. These special-edition jerseys are now being auctioned off in the Waddle In Shop at the stadium with the proceeds going to the team’s QuackerJack Foundation, which funds other charities and organizations.

The Ducks are known for finding ways to support many causes like the ALS Ride For Life organization, the Alzheimer’s Association and a heart health initiative sponsored by Northwell Health, said Michael Polak, the team’s director of media relations and broadcasting. The QuackerJack Foundation uses Chinese auctions and casino nights to help school groups, PTAs and businesses across Long Island. Polak believes it is important to “raise awareness.” 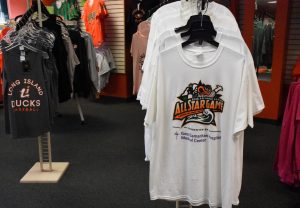 The ‘Waddle In’ souvenir shop at Bethpage Ballpark sells jerseys and other Ducks-related items, but they also auction off special jerseys to raise money for the QuackerJack Foundation. (Photo by Lauren Nicks.)

One of the Ducks’ most popular fundraising techniques is holding jersey auctions. The team auctions bright red jerseys worn by the players on the annual heart health night. Another big jersey occasion happens on Bud Harrelson Night. The event recognizes the former Mets player and current Ducks coach, who is battling Alzheimer’s disease. The team auctions purple jerseys with Harrelson’s No. 3 and proceeds go to the Alzheimer’s Association.

The auction for the all-star jerseys start at $75 and will be increased in minimum $10 increments, according to the organization’s auction website. Fans can place their bids by visiting the Waddle In Shop or by calling 631-940-3825 from now through July 31. The team said the jersey auction will end at the conclusion of the top of the seventh inning during the Ducks game against the Somerset Patriots on Wednesday, August 1.

“I think it’s great,” said Stephen Giordano, a Hauppauge resident and Ducks fan. “I think it’s a great cause.”