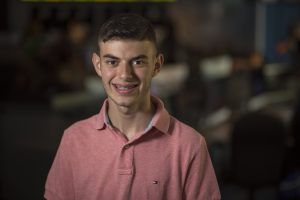 If Emanuel “Manoli” Figetakis could describe himself in three words, they would be “hard-working, dedicated and creative.”

“I always go above and beyond,” he said. Manoli is a 17-year-old junior at Francis Lewis High School in Queens, where he is a member of his school newspaper club and a reporter and photographer for the school newspaper, FLHS News. He is also a member of the school’s Hellenic club, in which students of Greek descent socialize.

Manoli has been interested in photography since he was 12 years old, when he took pictures of his family at events. His mother, father and two sisters—Kayla and Nina—have supported him the entire way.

At around 15, Manoli developed a passion for taking pictures of the New York City skyline and graffiti on the streets of Manhattan.

“The New York City skyline has a very distinctive architecture,” he said. “It easily sets it apart from every other skyline in the world because of how recognizable it is.”

Manoli also loves to report, and his favorite high school memory is reporting for the first time at a school pep rally.

“At first I was really nervous, but I was also very excited,” he said. He is now more casual about reporting, and says he can “walk up to just about anyone.”

Some of Manoli’s idols include photographers Jakob Dahlin, Max Guliani and Richie Jay, and photojournalists Hasani Gittens, Katie Honan and Katina Paron. “Different journalists cover different things,” Manoli said. “They all have different taste in photography. For instance, they could all shoot the same thing, but each photo would look different in the end.”

Manoli showcases his own photography at photographymf.com. It includes photos from settings such as the “March For Our Lives” protest in Washington D.C. in March and, of course, his most favored location of all: the New York City skyline.

Manoli first got involved with his school’s journalism program during his freshman year, then “got more and more into it gradually.”

His journalism teacher Jacqueline Linge said he “still reports after school, even though the day is done. Manoli does a lot for Francis Lewis High School. He created all of our social media pages, developed a school newspaper for [Inspiring Students to Succeed] and covered other events outside of school for the main paper.”

Upon being accepted into the Robert W. Greene Summer Institute program, Manoli was shocked.

“I got the phone call at 5:15 [p.m.] on the dot,” he said. “I didn’t think I’d get accepted, and my teachers were more excited than I was!” Manoli added that he was most looking forward to “working with other people his age who have the same interests.”

After high school, Manoli plans to attend either Hofstra University or LaGuardia Community College to major in film communications. He also wants to minor in photography and gain a background in business.

“I want to do what I really want to do,” he said. “I want to be behind the scenes. I want to follow my path.”