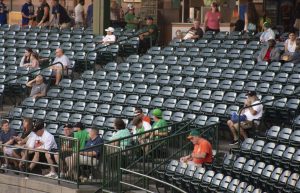 Empty stands at the Long Island Ducks game on Wednesday night. Only some super fans were in attendance due to the rained out game on Tuesday. (Christian Miller)

Stephen Watkin was set to see the Long Island Ducks take on the Connecticut New Britain Bees with his wife, Paulette, on Tuesday – until it was postponed due to torrential rain. The weather was still on his mind when he returned to Bethpage Ballpark in Central Islip for the rescheduled game Wednesday.

“We pick an under hang so we are dry no matter how hard it rains,” said Watkin, who comes to about 10 games a season.

U.S. Army veteran Padraic Nugent, 83, of Massapequa, a fan of the Ducks for the last six years, said he was also planning to come on Tuesday, but was pleased the game had been postponed.

A typical Ducks game this season has around 4,854 tickets sold, and 677 games have been sold out since the Ducks were founded in 1998, according to Michael Polak, director of media relations and broadcasting.

Wednesday’s game had 4,952 tickets sold, but the stands were relatively empty and concession lines were short.

Like Watkin, Kathy Fels, who was decked out in a green sparkling top hat with “GO DUCKS” written across the top and clover glasses in honor of Irish Night, is willing to tolerate some rain for the love of the game.

“It depends on what kind of rain it’s going to be,” Fels said. “Obviously, last night it was more stormy. But if it’s just a little drizzle, you come anyway. Worse-case scenario, you sit up at the top.”