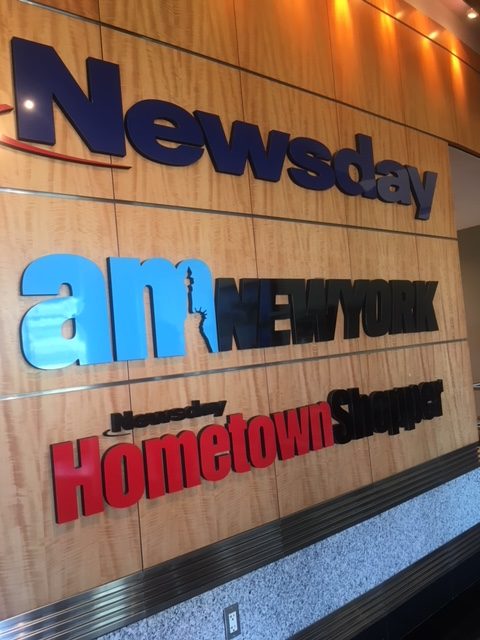 The entrance at Newsday in Melville displays the logos of the company’s various outlets. Photo by Zoe Gordon. (July 18, 2018)

Today was one of my favorite days so far in this program. We started out learning everything about broadcast journalism, from the control room to the anchor desk.

TV journalism was definitely something I had hoped to learn about here. I was pleasantly surprised that I enjoyed being on air and working behind the scenes in the control room. When I was anchoring, I had a clear thought in my head of, “Yep, this is what I want to do for the rest of my life.”

Later in the day, we toured Newsday. Being a Florida native, I did not really know what Newsday was or how big it was before coming to Long Island. The thing I found most interesting is how much history Newsday has as a company. I also thought it was pretty awesome that Newsday was founded by a woman.

Lastly, we had the Ducks game. It was so much fun, but also stressful to find people to interview. I think my group changed our story idea five times. However, in the end we were able to conduct good interviews, film lots of B-role and just have fun. I was able to figure out things I have never done before at my school, like filming videos and taking pictures.

I also had the best time just hanging out with the friends I have made just days ago. I had no idea that I would make such good friends in the short week we have at Stony Brook. So far, my experience would not be the same without them.