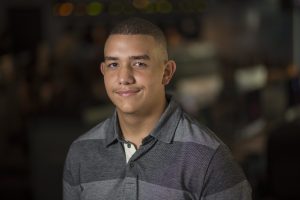 Sebastian Germosen is devoted to journalism, but sees it as a backup career if his dream of becoming a professional baseball player falls through.

“My goal is to go to the Major Leagues as soon as possible,” said the 16-year-old junior at Archbishop Molloy High School in Queens. “It’s my dream job and it’s what my life revolves around. But my backup plan if baseball doesn’t work out is to major in journalism.”

In pursuit of his goal, Germosen plays catcher and third baseman on the his school’s baseball team. His sports role model is José Altuve, a second baseman for the Houston Astros.

He is a staff writer on the school’s newspaper, The Stanner. “I like the newspaper club because it allows me to speak about topics outside of the school and allows me to express my ideas and thoughts on political or world issues freely,” he said.

Germosen’s interest in journalism was also piqued by watching CNN and Fox News.

His teachers and his parents are his biggest role models. “Sebastian is an excellent student and the brains of the family,” Germosen’s mother Erica said. And “he looks out for his little brother.”

In his free time,  Germosen reads, exercises, plays video games and a lot of basketball. “I enjoy these hobbies because they let me relieve myself after stressful days,” he said.

After high school, Germosen’s dream is to attend Vanderbilt University in Nashville, Tenn., and major in sports management.

To keep his journalism options open, Germosen applied to the Stony Brook University’s Robert W. Greene Summer Institute for High School Journalists when his newspaper adviser mentioned it. “I felt relieved and excited when I learned I got accepted,” he said.

“My expectation of the program,” Germosen said, “is that it will be a wonderful program with great teammates and awesome coordinators, and I will learn a lot of new things about the journalism industry.” 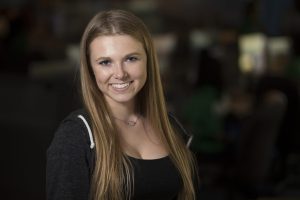 Taylor Yon wants to perfect her journalism skills and use them for a career in the FBI.

“I have always had a passion for writing, and I enjoy putting all of my thoughts on paper, and journalism gave me the opportunity to write in a way that could be read and informing,” said the 16-year-old junior at Marjory Stoneman Douglas High School in Parkland, Florida.

Taylor’s experience in high school, scene of a massacre in  February, has driven her desire to become a part of the FBI.

Though she has no role models in the journalism industry, Taylor admires and respects The Wall Street Journal and The Guardian. She also watches CNN for news and inspiration for her writing.

Taylor has achieved academic success in high school, where she has taken advanced classes such as AP World History and French 2. This year, she will take AP Biology, AP Psychology and AP Language Arts. She said that these subjects will help “broaden my horizon.”

Taylor writes for her school newspaper, Eagle Eye. She is active in health and fitness clubs and enjoys many hobbies and activities, including soccer and tennis, taking hot yoga classes with her best friend and reading.

Taylor’s friends describe her as very outgoing and adventurous, due to her love of trying new  things. Her friends go to her for help with all academic subjects except for math. Taylor’s family [Note: all, who?]  describes her as a person who loves to travel and broaden her horizons by learning about different cultures.

Despite her interest in writing, Taylor wants to attend the University of Maryland or Penn State and major in criminal justice to achieve her goal of becoming an FBI agent.

Attending Marjory Stoneman Douglas — where a gunman killed 17 students and faculty — hasn’t been easy for the students, including Taylor. She has used the shooting as an opportunity to expand her interest in journalism and writes stories beyond the scope of her school.

“The whole world was looking to us, and journalism was an outlet that showed the world we are more than a school shooting,” Taylor said.

When asked about her stance on gun control after the shooting, she said her belief is that people should not have access to assault rifles unless they are in law enforcement.

“I am not anti all guns,” she said. “I strongly believe in the Second Amendment as well, but assault rifles to me are a weapon of war and all they do is cause mass destruction to our country.”

Taylor sees the Robert W. Greene Summer Institute for High School Journalists as a great opportunity for her to showcase her passion for journalism and to learn new things about the industry. Taylor learned about the program when her newspaper adviser, Melissa Falkowski, told her and her friend Zoe Gordon about it.

“I was and still am so excited to learn and grow from this program,” Taylor said. “I want to learn as much as I can while I’m there.”