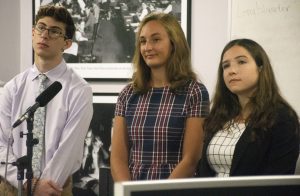 On a small Pacific island named Yap, where Rep. Thomas Suozzi’s daughter was educating children, Caroline Suozzi and her students were inspired by the activism they saw in the United States after the shooting in Parkland, Florida. When they read about current events, Caroline Suozzi felt as if the whole world was watching change being made.

“We were told very often about gun violence in the United States,” she said. “They were so inspired that young people were taking action.”

After the Parkland tragedy in February, Suozzi felt a strong connection with the students of Marjory Stoneman Douglas High School. She saw students standing up to politicians, fighting for their right to live.

“The whole world is paying attention,” she said.

While students from Parkland were planning the March for Our Lives in Washington, D.C., a group of student activists, along with Suozzi and her father, were creating a sister march in Long Island. More than 1,500 people attended the Long Island rally on March 24, and they advocated for gun reform and safety in schools.

“After Parkland, I knew I had to do something,” student activist and recent Syosset High School graduate Andrew Goldman said. “As students, we are turning our thoughts and prayers into action for change. We’re pulling out every stop.”

After the protest, the Long Island activists wanted to continue the momentum, Carolyn Suozzi said.

“They came back and said we want to to keep this conversation going,” she added. “This time it’s a call to action. It’s also to emphasize the importance of registering to vote.”

Caroline Suozzi and Long Island students are planning a rally in Breezy Park, Huntington, on July 29 to coincide with the Road to Change rallies created by March for Our Lives activists. The rally will feature two speakers from the families of student Jaime Guttenberg and teacher and coach, Scott Beigel, who both had Long Island connections and were killed in the Parkland shooting.

The key emphasis of this rally will be to register and motivate young adults to vote. The organizers of the rally are using social media and putting up flyers in every town in Thomas Suozzi’s district, hoping to attract a thousand people.

“The way to bring about change is voting,” said Sarah Silverstein, of the Thomas Suozzi campaign team.