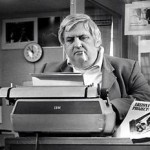 “It was the last thing my father told me he desired to see come to fruition,” said Greene’s son, Robert Greene Jr. “To him, high school newspapers and the students working their respective ‘beats’ were not only the future of the industry but, more importantly, the safeguard to ensure the true meaning of the First Amendment’s freedom of the press.”

Greene, a pioneering investigative reporter and editor and mentor to thousands, died April 10, 2008.

The Robert W. Greene Summer Institute for High School Journalists became a reality in 2009 and continued each year since then. The students live at the university and work in the School of Journalism’s multimedia newsroom under the instruction of professional journalists. They learn basic skills in news reporting, writing, editing and using video. As a culminating activity, students produce original work across several media platforms.

“Bob’s vision was that the best and brightest of the next generation, while still in high school, would get the opportunity to study and work with some of Long Island’s top professional journalists,” said Howard Schneider, founding dean of Stony Brook University’s School of Journalism. “I can think of no better way to honor Bob’s memory.”

The institute’s advisory board is chaired by Ron Parr, president of The Parr Organization, in addition to honorary co-chairs Robert Greene Jr. and Kathleen Greene.